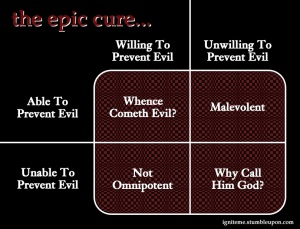 In the aftermath of the horror that took place in Norway recently, the headline on the Globe and Mail print version today reads:  Can Science Really Explain Evil?   Doesn’t that seem just a bit sarcastic to you?  It did to me.  Let’s have a look at that statement – shall we?   First of all the statement belies an underlying assumption about science, in this case, as an authority that makes you sit up and ask challengingly, “Yeah? Can they?”  Note that I did not write it. I wrote they. That is because here is another assumption:  That science represents the collective opinion of a group of people rather than a system of knowledge.  Now let’s imagine that I am ultra-religious.  Or even a little bit religious. Or even religious in a tiny way ; in a way that has been unexamined, say the type of faith you have in a belief that you have never bothered to question. Like Christmas: good; Ramadan: makes me feel funny and uncomfortable.  In this case the belief is:  There is a group of people called scientists that arrogantly believe they can solve the mystery of life, the universe and everything (to turn a phrase).  Oh and by the way these stuck up geeks think I caused global warming.   This ingrained belief in the truth of what a scientist really is leads me to the next question I then ask myself:  If science can’t explain evil, what can?  What is the next choice?  Oh!  Maybe faith?  Maybe religion?  It doesn’t matter. The question is the hook that makes you buy the paper.   If you’re a skeptic like me, the last thing you want to do is fork out the coin.  Instead I went to the internet version and read the associated article.  Nowhere in the article is there any implication or certainty that science has the answer to this pseudo-authoritative question.  I’ll repeat it again – just in case you forgot : Can Science Really Explain Evil?  Who said science ever has explained evil?   There is only discussion of neuroscience and psychology.   In fact one of the more banal statements that is made in the article is that the scientist, who is representing the complexity of this question, reveals that empathy is on a spectrum and that “[t]he spectrum approach reminds us that none of us are angels and none of [us] is the devil [sic] …”  Well.  Thank you so much for that gem of wisdom. Now I understand everything.   You may be wondering as I did, why there is no mention of that other discipline that explores the problems of our day known as philosophy.   Oh, but there is.  It is explained that the scientist’s “…investigations are more practical than philosophical”.   It seems to me – call me a little out of it – that neuroscience and psychology, being rather young disciplines, ought not to have been called upon as the only route to explain the question of acts as disturbing and vile as the recent events in Norway.   Using philosophy is wanting because, well, it’s difficult to distill and present the difficult concepts to a layperson – especially when, as a writer, you are trying to make deadline to keep the paper afloat in these times of yellow journalism.  And anyway – philosophy is way beyond what most of us can handle in the age of quick sounds-bites and headlines delivered to our already overflowing inboxes.

Was the media ever anything more than yellow journalism?   That’s a good question to ask too.  And mostly I want all of us to ask a lot of questions.