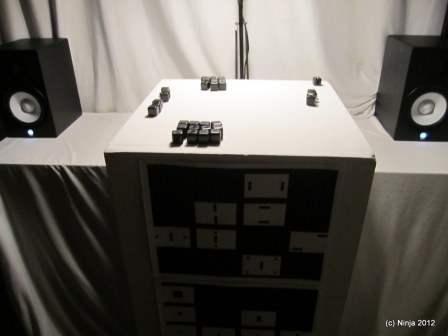 In this second of a four part series of soundscapes and interviews I did at the Toronto Electroacoustic Symposium this August, I share two sound exhibits.   PluseCubes by Ryo Ikeshiro.   From the program:   “is an interactive sound where visitors are invited to become part of an implicit feedback loop whose other components include a set of small cubes on a flat surface, computer vision and digital signal processing.  The cubes are tracked by a web camera positioned overhead and processed by a programming environment known as Max/MSP/Jitter.  The audience interaction is created through the placement and movements of these cubes acting as  a control device which in turn results in the production of audio and physical vibrations.    Ryo is a London, England  based electronics and acoustic musician working in the fields of audiovisual composition, improvisation, interactive installations, soundtrack and therapy.   He is currently studying for a PhD in studio composition.”   The next  exhibit I explore is Ghostwood a/v by Michael Trommer who did the audios, and Brent Bostwick who did the visual part of the exhibit.   From the same program:  “It is an audio-visual installation which investigates the psycho-geography of Ontario’s northern wilderness.  It is primarily focused on the use of infrasound provided by specially constructed tactile transducers and is supported by a video component of the Georgian Bay landscape.  The project title is is a reference to those suburban neighbourhoods in which the sole memory of what has been displaced or eradicated as a result of their construction survives in the now prosaic  street names (‘Valleyview’, ‘Forest Hill’, etc).”

In our discussion of infrasound, Michael mentions a phenomenon called the brown note and wonders if it is a myth.  As it turns out, it is a myth, according to my sources.  But you’ll hear more about that during the interview.