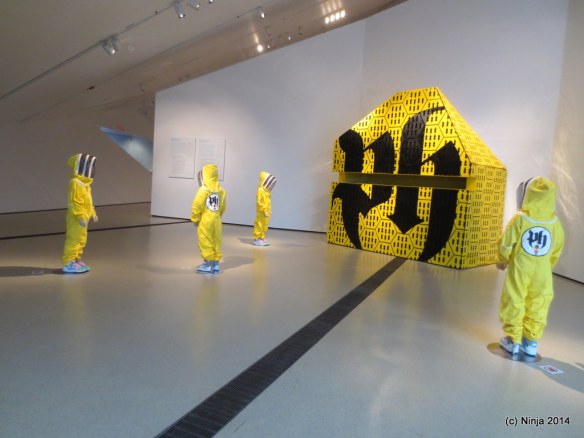 On January 26, Special K and I were scheduled to participate in an event at the Royal Ontario Museum called Carbon 14 – A Day of Dialogue – The Changing Arctic Landscape.  The Arctic government and policy makers are very concerned about the changes they anticpate in the arctic latitudes and have seen over the last several generations.  As a prelude to this, I visited the exhibit Climate is Culture at the museum where I viewed installations inspired by climate change.  My podcast today is a soundscape of my visit to that exhibit.

1:09-5:01 –  What is the Polar Vortex?  Andrew Freedman on PBS Newshour from Climate Central

1. My four o’clocks have germinated again.

2. Some of the trees in the neighbourhood have re-blossomed.

4. A mother and daughter  pair with matching bleach blond perms, were on their way to a TIFF gala in a Bentley convertible.  There were blokes in caps riding in Benz’s.  (We were in a fancy traffic jam).

What do Canadians do while they are waiting for the end of the world?  Watch hockey of course.  But that doesn’t stop Ninja from engaging her father and nephew in a lively discussion about impending global catastrophe.  But before we get to that, Ninja shares expert information about climate change,  how petroleum is processed, and what is required to support life here and elsewhere in the universe.   Ninja is hoping to soon make the three and half year trip to Jupiter’s moon Europa where scientists think life could exist in our solar system.

Europa may be mankind’s only hope.

In the true spirit of tree hugging, Ninja and Special K head down to the park to celebrate Earth Hour 2008. On the way they meet a star gazer, a cottager, and several screaming children. Oh yes and Ninja notices a computer mouse attached to a shampoo bottle slung over an overhead wire. Join this soundscape for a taste of the event Toronto style.