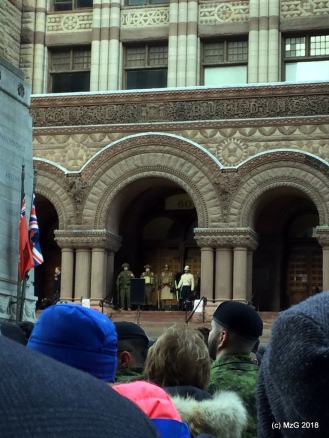 November 11, 2018 was the 100th anniversary of the end of World War I, the war dubbed as the war to end all wars.   In honour of the Armistice, Special K and I went down to what we, in Toronto, call the old city hall, where the Cenotaph, one of our war memorials, was erected in 1925.  In this country, more than two generations have lived in a time of peace and have no first hand knowledge of the realities and horrors of war.  What would another world war look like?  In the face of some 14, 000 nuclear weapons spread over nine countries, one deployed bomb would almost certainly result in the deployment of many others, decimating the world population and ending civilization as we know it today.  Sobering.   So I think it is important to reflect on the sacrifices made by others and past generations to mitgate the ravages of military confrontation.

During breakast at a local cafe, Special K and I had a chance meeting with a woman who was from Sweden.  We struck up a conversation with her and found out she had never experienced a Remembrance day event.   We invited her to join us and I think we may have overwhelmed her with our non-stop anecdotes of Canadian history and military efforts.

This Sunday November 11, at the Cenotaph, we observed the customary two minutes of silence at 11:00am followed by poem recited in English, Oji-Cree, and French,  a thought provoking address by our Mayor,  and a reading of the poem In Flanders Fields, written by Canadian physician Lieutenant-Colonel John McCrae in 1915.

Have a listen to my sound scene audio of an historic remembrance day.

Part of the program is reproduced here:

Committment to Remember (read in English, Obi-Cree, and French)

They were young, as we were young,
They served, giving freely of themselves.
To them we pledge, amid the winds of time,
To carry their torch and never forget.
We will remember them.

In Flanders fields the poppies blow
Between the crosses, row on row,
That mark our place; and in the sky
The larks, still bravely singing, fly
Scarce heard amid the guns below.

We are the Dead. Short days ago
We lived, felt dawn, saw sunset glow,
Loved and were loved, and now we lie
In Flanders fields.

Take up our quarrel with the foe:
To you from failing hands we throw
The torch; be yours to hold it high.
If ye break faith with us who die
We shall not sleep, though poppies grow
In Flanders fields. 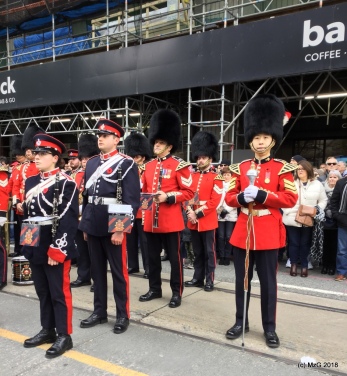 War courtesy of: Jamison491
Barking, crying and other sounds of human suffering courtesy of: http://soundbible.com
Photos:  Mine