It took Jowi Taylor 11 years to collect the pieces and create “Voyageur”, the Six-String Nation guitar.   It was made from 64 individual artifacts modern and ancient.  Each tell a story from the history of Canada.  A piece from former Prime Minister Trudeau’s canoe paddle, wood from the sacred albino spruce, (also known as the golden spruce),  of the Haida First Nation people, the top of Wayne Gretzky’s hockey stick, part of the cabin of a former S. Carolina slave John Ware, a piece of the handle from a championship oyster-shucking knife, and many more objects adorn and make up this guitar.  Jowi calls it a living museum because he invites people to touch it, photograph it, and of course play it.

This episode of Hot Fossils is an homage to this living piece of history, this unique method of telling 64 wonderful stories.  Jowi Taylor gave the keynote address at this year’s Podcasters Across Borders. I attended the weekend of June 21st.  After the keynote, Jay Moonah was invited up to play the guitar.  My show today opens with Jay and Bob Goyetche playing “With A Little Help From My Friends” by Lennon and McCartney, followed by the question period.   I have edited out portions of the question period in order to focus on the story of the guitar itself.

After the question period, I talk to Jowi and he describes additional pieces that make up the guitar case.  For those of you interested in obscure and not so obscure Canadian lore, you’ll find out about the fun fur that lines the case, pieces of the costume that Karen Kain wore during the ballet Sleeping Beauty and material from the sportcaster Don Cherry’s pants.   You can read all about the six-string nation guitar project at the site sixstringnation.com. 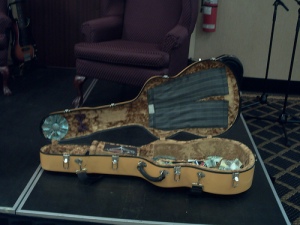